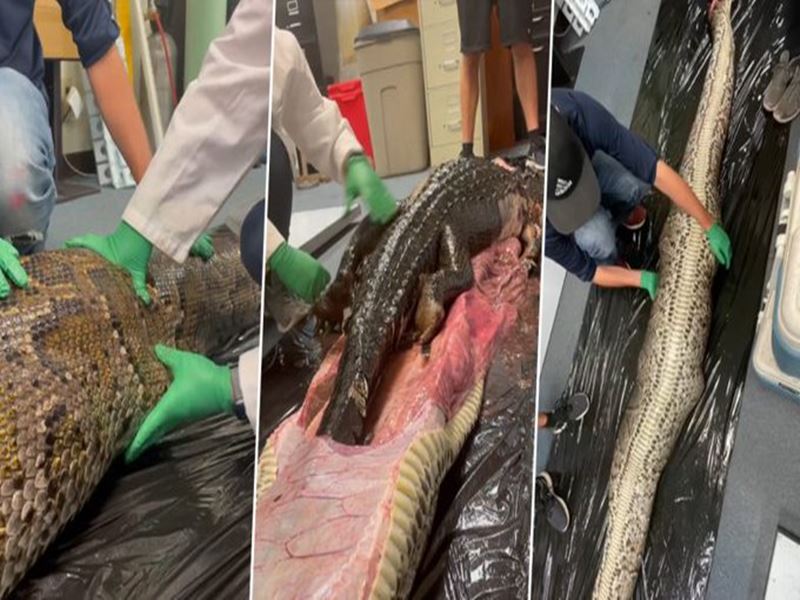 Burmese pythons, which were once imported to the country as pets, are now a danger to the Everglades’ sensitive ecosystem in Florida.

Unsettling video making the rounds online shows an entire alligator discovered inside a Burmese python in Florida. The 18-foot python was killed by national park employees after being captured in the Everglades, according to Newsweek. An whole 5-foot alligator was discovered within the stomach of the exceptionally bloated creature when it was autopsied. Hundreds of Burmese pythons were removed from the Everglades during the 2022 Florida Python Challenge, which took place in August of this year. Go through this entire post to know about the 5-Foot Alligator Inside Burmese Python viral story. Get all the details here. Read: Rare Case of 8 Fetuses Discovered In the Abdomen Of A 21-Day-Old Baby in Ranchi

One of the world’s biggest snakes, measuring up to 20 feet long, is the Burmese python (Python molurus bivittatus). The 5 foot alligator that this particular Python had eaten was around 18 feet long. In Florida, Burmese pythons must be put to death. The people who discovered it put this Python to death and delivered it to a research facility for an autopsy and sample collection. This video illustrates that procedure. Read Also: Panel to Notifies Amended IT Rules to Be Set Up in 3 Months

Due to the Burmese python’s long lifespan and fast reproduction, along with the subtropical climate of South Florida, these snakes have successfully invaded environmentally sensitive places like Everglades National Park. Due to the python’s varied feeding choices, this threatens a range of animals.

Burmese pythons were first imported to the United States as pets, but since being released into the wild in the late 1970s, they have posed a threat to the Everglades. The snake feeds on other reptiles, birds, and mammals including raccoons and white-tailed deer because it has no natural predators. Though the exact number of Burmese pythons in Florida is unknown, Newsweek estimates that there are well over 100,000 of them there.