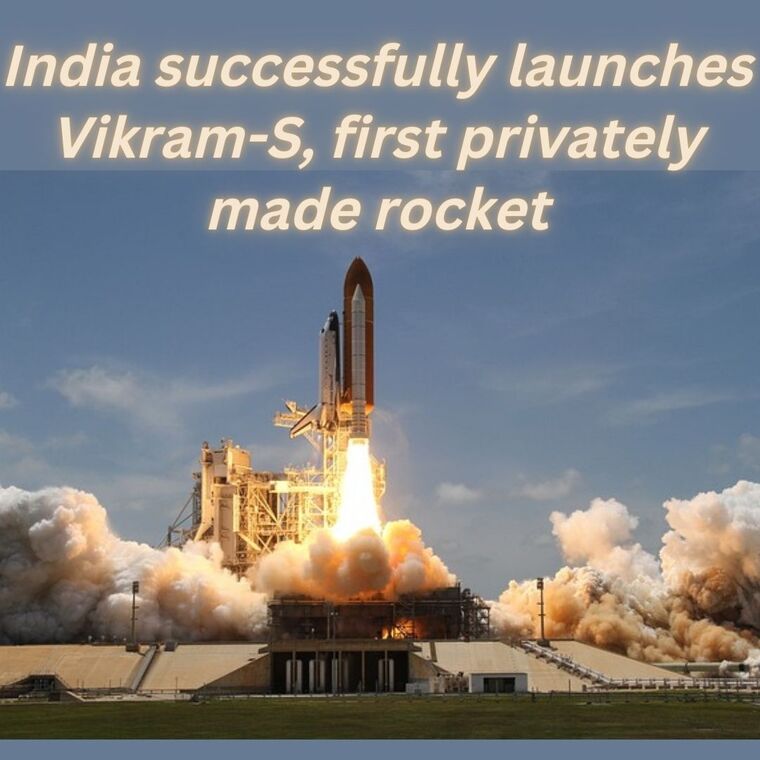 In order to supplement its state-run space program, the Indian government has been pushing for the growth of a private space industry.

Let’s have a look on the entire discourse for getting all details on India successfully launches Vikram-S. Please have a look here. India has achieved a significant milestone in its efforts to establish a commercial space industry and compete on price by successfully launching its first independently constructed rocket. Read: 5-Foot Long Alligator Found in Giant Burmese Python Stomach- Florida, See Video

As part of the Prarambh mission, Vikram-S launched on Friday at 11.30 a.m. (06:00 GMT) from the Satish Dhawan Space Centre in Sriharikota, an island off the coast of southern Andhra Pradesh state (the beginning).

The Indian government body that oversees commercial space activity is headed by Pawan Goenka, who said: “I am glad to announce the successful completion of Mission Prarambh, the beginning.”

According to the firm

For its initial launch, the Skyroot team had set a goal of 80km (49.7 miles), which some organizations consider to be the outer limits of space. The border between the Earth’s atmosphere and space is defined by the Karman line, which is 100 kilometers above sea level. Read Also: Rare Case of 8 Fetuses Discovered In the Abdomen Of A 21-Day-Old Baby in Ranchi

The rocket was seen in video footage launching from the space center and sending a plume of smoke and flames in its wake. According to officials, it landed in the Bay of Bengal around five minutes after launch.

The goal of Skyroot

The goal of Skyroot, a company founded by Pawan Chandana and Bharath Daka, is to launch small satellites for up to 90% less money than current platforms.

It anticipates saving money by employing a composite material rocket architecture that can be put together in under 72 hours. Starting the next year, it intends satellite-delivery launches.

In order to supplement its publicly funded space program, which is renowned for its low-cost launches and missions, the Indian government has been working to create a private space industry.

The Skyroot rockets are named for Indian physicist and astronomer Vikram Sarabhai, who is regarded as the pioneer of India’s space program.

The government opened the door to private businesses in 2020

After the government opened the door to private businesses in 2020, Hyderabad-based Skyroot, which was created in 2018 and is supported by Singapore’s sovereign wealth fund GIC, became the first space start-up to sign an agreement to use ISRO launch and test facilities.

It currently employs 200 employees and has raised 5.26 billion rupees ($64.42 million) to far. According to the company, around 100 workers were involved in the first launch effort.