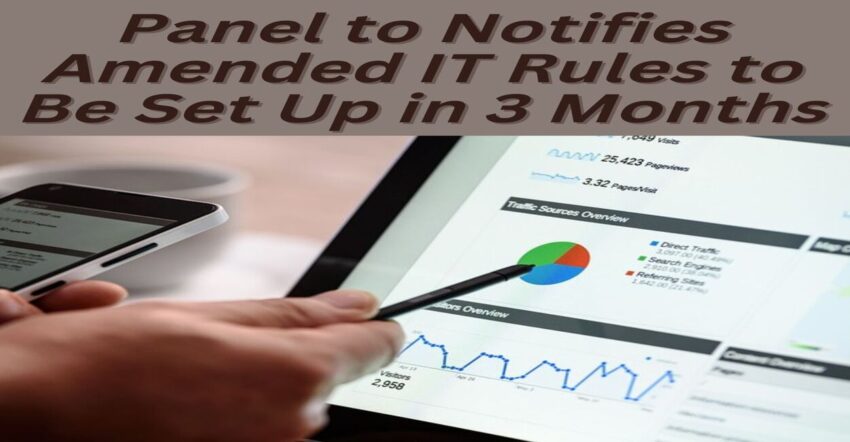 The government announced new information technology regulations on Friday, under which appeals committees will be established to handle user complaints against social media firms. The Information Technology (Intermediary Guidelines and Digital Media Ethics Code) Amendment Rules, 2022 have been made public by the government. In accordance with the new regulations, government-appointed panels to hear appeals from social media users will be established in three months. According to the notification, each grievance appellate committee will include a chairperson and two full-time members nominated by the Center, two of whom will be independent members and one of whom will serve as a member ex-officio. This post is included with facts on Panel to Notifies Amended IT Rules to Be Set Up in 3 Months. Have a look on the details here. Read: Depression, Anxiety, Lower Life Satisfaction Linked With COVID- Says World Famous Lancet Study

The new regulations, according to Ashwini Vaishnaw, minister of electronics and information technology, will provide users more power.

He explained in a tweet that the Grievance Appellate Committee (GAC) had been established to hear appeals against the decisions of the Grievance Officer chosen by the intermediary. These IT regulations, according to Rajeev Chandrasekhar, Union Minister of State for Electronics and Information Technology, are the next step in achieving “our goals of an open, safe, and trusted, accountable Internet.” The government and internet intermediaries will now work together, he added, “in creating and preserving our Interest secure and trusted for all Indians.” Read Also: Online Price Tip for the Oppo A17, Oppo A17K, and Oppo A77s in India: Report

According to the new regulations, anyone who is unhappy with a grievance officer’s judgment has thirty days from the day they received contact from the grievance officer to file an appeal with the grievance appellate committee. The notification said that “the Committee shall deal with such appeal promptly and shall endeavor to decide the appeal conclusively within 30 calendar days from the date of receipt of the appeal.”

According to the statement, “The Grievance Appellate Committee shall implement an online dispute resolution method wherein the entire appeal process, from the filing of the appeal to the decision thereof, shall be performed through digital medium.”

Elon Musk, CEO of Tesla Inc., completed his takeover of the microblogging website Twitter at the time the message was sent. Information Technology Rules 2021 are modified by the new regulations. They state that the intermediary must use reasonable efforts to prevent users of its computer resources from hosting, displaying, uploading, changing, publishing, transmitting, storing, updating, or sharing any information that belongs to another person and over which they have no legal authority; that is offensive, pornographic, or pedophilic; invading another person’s bodily privacy; or that is racially or ethnically objectionable.

In addition, they state that the intermediary will use commercially reasonable efforts to ensure that users of its computer resources do not host or display any content that violates any patent, trademark, copyright, or other proprietary rights, deceives the recipient about the message’s origin or knowingly and intentionally communicates any misinformation or information that is patently false, untrue, or misleading in nature, impersonates another person, poses a threat to the unity of the internet, or otherwise violates any of the following: (ANI)