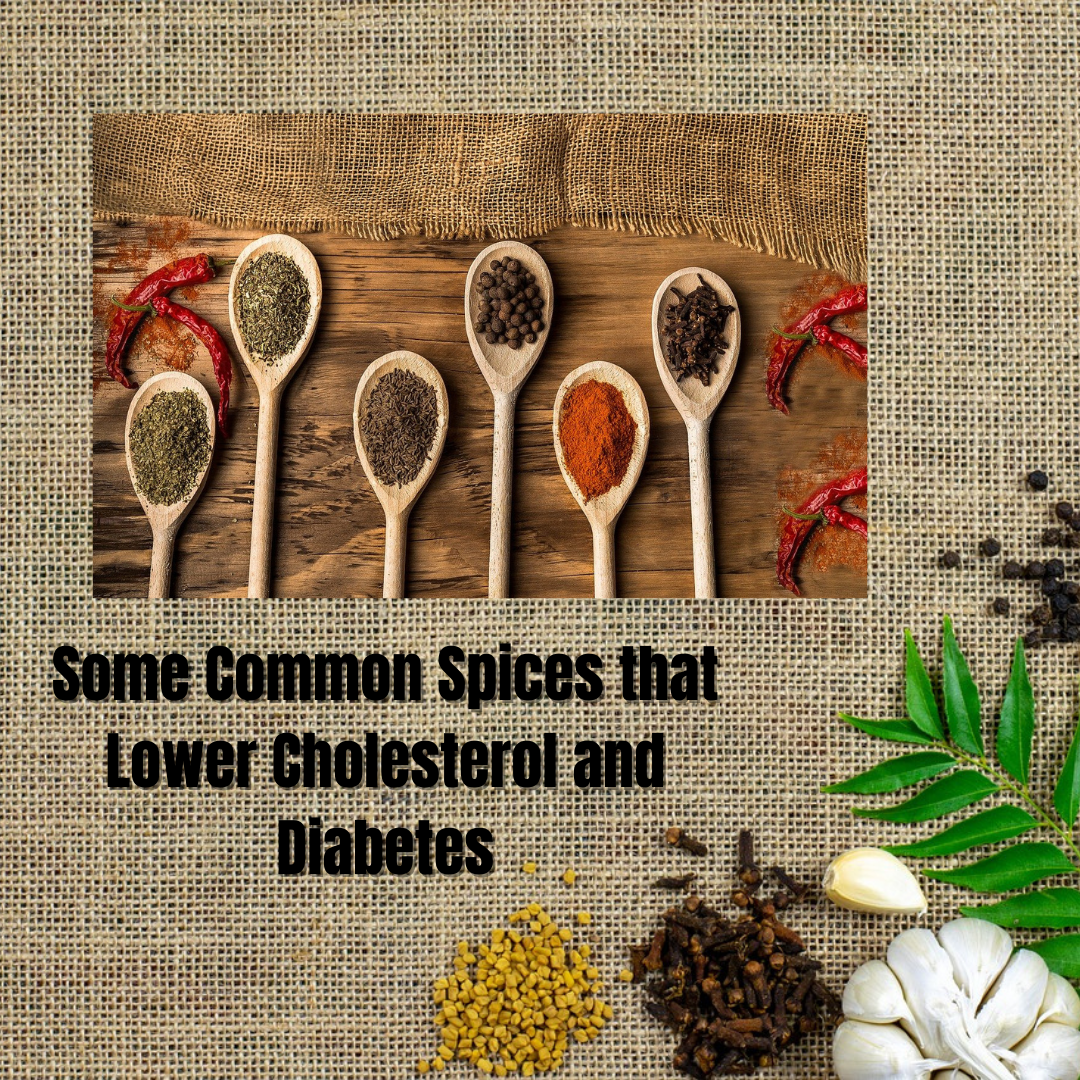 When you have diabetes, there is no treatment that can effectively stop this health problem. It is, nevertheless, possible to monitor or manage it. Many spices and cooking ingredients that have a vital impact to maintaining our health fit can be found in every Indian kitchen. The use of these spices in Indian cookery is most likely the explanation for their strong immune systems. Spices, without a question, play an important function in keeping us fit and healthy. Although you should limit your spice intake to control many diseases, some spices are extremely useful in curing a variety of ailments. Let’s uncover some information on some spices that are really effective for health. The focus zone of our discussion will be held on Spices that Lower Cholesterol and Diabetes.

Some Extremely Healthy Spices and Ingredients

Let’s have a look on the below points that contain Common Spices that Lower Cholesterol.

Turmeric is a must-have in your diet because of its natural anti-inflammatory characteristics and ability to assist the body enhance its antioxidant capacity. Turmeric contains the compound curcumin, which helps to lower blood sugar levels.

Black pepper, sometimes known as the “King of Spices,” aids in the absorption of other spices, is a known source of antioxidants, and aids in the body’s overall health. It allows the body to break down fat cells and has been shown to aid in cholesterol reduction. It indeed comes in the list of Spices that Control Cholesterol.

Its anti-inflammatory, germicidal, and analgesic properties help the body protect itself against the symptoms of diabetes by assisting the body in improving insulin levels.

Cinnamon’s antioxidant and antibacterial characteristics, as well as its antidiarrheal action, aid in the removal of blockages in your internal systems, allowing your body to lower cholesterol and increase blood flow. Its antioxidant capabilities assist the body in managing insulin sensitivity while lowering blood sugar levels.

Fenugreek seeds have a high fibre content, which helps the body absorb fewer carbs. It also helps to reduce blood sugar levels by slowing digestion and increasing glucose tolerance in the body.

Basil strengthens the body and helps to maintain blood sugar levels in balance, in addition to increasing immunity. While it’s exciting and tasty to try new diets and food fads, it’s also important to remember to include these spices and some typically Indian recipes in your weekly meal plan.

Garlic: The Most Frequent Indian Spice

Garlic’s anti-diabetic and hypolipidemic qualities also assist diabetics in maintaining appropriate blood sugar levels. Sulfur components in it defend against oxidative damage and even excessive cholesterol levels. Garlic supplementation with a typical anti-diabetic drug improves blood sugar management in Type 2 diabetics, according to a 2011 study published in the Pakistan Journal of Pharmaceutical Sciences. Garlic may help treat diabetes and related cardiovascular disorders, according to a 2014 study published in the Journal of Diabetes & Metabolic Disorders.

Aloe Vera: Not a Spice but Can Be Considered

Regular usage of this well-known liver tonic tones up the hepatic-biliary system and controls sugar and fat. According to preliminary studies, drinking aloe vera juice can help lower blood glucose levels, making it a viable treatment option for diabetics. Due to the presence of substances such as lectins, mannans, and anthraquinones, aloe has the following beneficial properties. Patients with excessively high quantities of these molecules in their blood have their blood lipids (fats) reduced. Reduced swelling and faster wound healing: Leg wounds and ulcers are common diabetes consequences, and they normally take longer to heal than in healthy non-diabetic people.

Read: What is the Psychosis and its Causes?

Also Read: Social Anxiety? What Is It and Are You Experiencing It?

It’s critical to keep your blood sugar and cholesterol levels in check for your general health. You can do it by eating a nutritious diet, exercising regularly, not smoking, maintaining a healthy body weight, and taking your medications as directed. You can also use herbs and spices to help with symptoms and blood sugar control. The top ten herbs and spices for diabetes are listed below.

Which spice is good for Diabetes?

Cinnamon is an antioxidant that has been demonstrated to help with insulin sensitivity and fasting blood sugar levels. Cinnamon has the power to improve insulin sensitivity, according to a study published in the International Journal of Molecular Science.

Can Ginger and Garlic lower Cholesterol?

Raw garlic has been proven to have a positive effect on major CVD risk variables in a number of human investigations. Consumption has been demonstrated to lower total cholesterol, LDL cholesterol, and triglyceride levels. Consumption of half to one clove of garlic each day decreases cholesterol levels by about 10%.

Cinnamon isn’t suggested for treating high cholesterol because there’s little proof that it can lower your cholesterol. Although animal studies have shown modest cholesterol-lowering effects, there is limited evidence that this applies to humans. The majority of the studies found no effect on blood cholesterol levels.